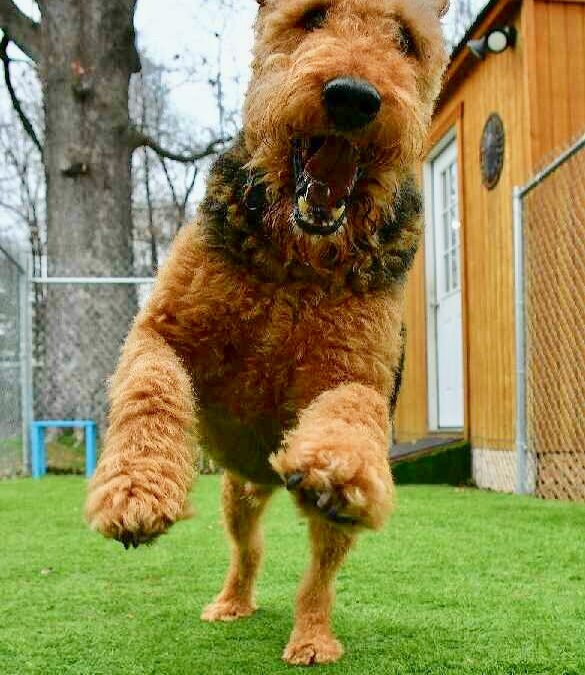 Ranger came to us in the usual way. The way everyone finds everyone now, the way we found each other, or in other words, via a Facebook post.  A wooly harmless looking pooch, he was posed demurely in a tidy living room, nose submissively on the floor between his paws, his appealing brown eyes stared playfully into the camera.

An adorable young adult (Airedale as it turned out) terrier in need of re-homing!

Did you see this on Facebook? Can we go look at him this afternoon?

The text hit my phone with a screenshot of the posted photo. I sighed. Of course, there is no such thing as “going to look at” a dog in need of adoption. Once one drags out a tattered old leash and heads that way in the car, one is tacitly committing to the madness. A little like driving a laboring woman to the hospital, but without the belly and the cramps. Everybody knows, as inevitable as taxes, as certain as Christmas hitting the mall in October, we will be three instead of two on the way home (and five instead of four when we get there, considering our existing herd of two dogs).

We found Ranger galloping around an unfenced suburban yard outside Paducah. The neighborhood, a little too tightly packed with houses, was clearly a bit small for the likes of Ranger, who was playing an overly exuberant game of unproductive tag with a squealing six year old girl, each near miss between the two punctuated by his thunderous barks. 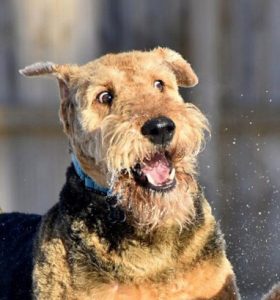 We introduced ourselves to  Ranger’s mistress amidst the barking and squealing. She was a friendly middle aged woman who was obviously outmatched by the dog. We also met Ranger’s sibling, a much more manageable three-legged small dog of indeterminate breed.

I had first assumed the girl was a sibling of Ranger’s as well, but it turned out she was a tiny terrorist from across the street and, once she was asked to return home, Ranger’s soon to be relieved mistress set about trying to call the dog to us. To no avail. Ranger was twitchy and skittish and clearly felt little pressure to do anything on command.

Eventually, hot dog treats were offered in the hope of sweetening the pot.

They did little if anything to hasten the process.

“He’ll come eventually,” she said sinking to a seated position on the sidewalk among an assortment of knee-deep fresh holes of varying sizes.

“Ranger likes to dig,” she added by way of explanation, a rueful smile on her face.

Oh, GRAAAAAAAAAATE, I intoned to myself.

Ranger began a game of warily approaching us as we chatted (pretending to ignore him) and then pulling away at the last second each  time we put a hand out to pet him or catch his collar. Even I, skeptical as I am, underestimated Ranger’s skill at his game. It would be a full thirty minutes before the dog would start to settle and approach us, with him finally coming to a stop near me and pressing himself against my leg tentatively, as I petted him. All the while the dog faced away from me and stared off into the distance as if he couldn’t admit, even to himself, that he was enjoying the attention he was getting. 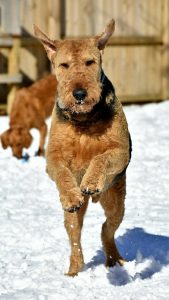 We questioned his soon to be former mistress: Does he sleep in the house? Yes. Is he affectionate? Yes, when he isn’t galloping about like a hellion, he’s very loving and affectionate.

Considering the thirty minutes we’d just spent it was a bit hard to believe.

But, still. Her words had the ring of the truth.

Ranger surrendered, almost imperceptibly, a few more pounds of his weight against the steadying counter pressure of my leg as I kept up the petting.

My partner shot me a meaningful look: you know you want him.

Actually, I kind of didn’t.

The dog was wily, unruly, stout as a pony and (I highly suspected) smart in a bad way.

“Maybe we should take him overnight just…see how he reacts to our other dogs,” I (rather incredulously) heard myself say, as I kept up the flurry of unacknowledged pets I was administering to the dog’s hind quarter.

“How is he in the car,” my partner quickly asked as she hastily clamped our leash on to the dog’s collar.

Ranger’s erstwhile mistress swallowed hard and tears gathered in her eyes, “Oh he loves the car.”

“We’ll just see how it goes,” I reiterated.

We all three nodded knowing the dog would never be back. 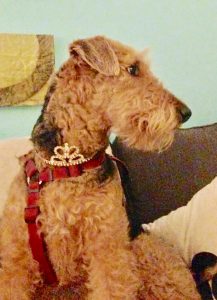 Ranger allowed himself to be lead easily to the SUV and, once there and faced with the opened door, gathered himself suddenly and leapt into the back seat gazelle-like. He settled himself quickly in the center of the seat in a perfect sit and fixed his gaze expectantly out the windshield.

We climbed in the front seats.

“We’ll call him Ranger*,” I proclaimed as we sped toward home.

My partner, flush with victory, having acquired the latest 80 pounds of fur covered nut ball she never knew she (or anybody else) wanted, was all about agreeing,