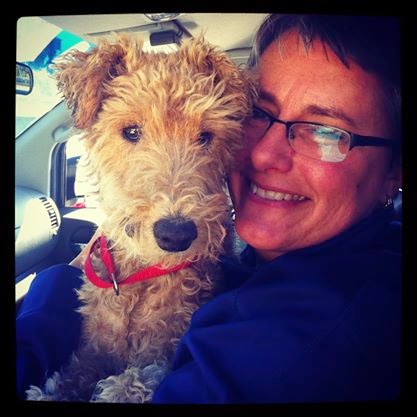 And so Pippii was ready.  We were ready.  I booked a campsite.  And that campsite was the eponymous Site Six.  Site six is, by far, the most beautiful and desirous campsite in the campground we favor. Since we’ve had a camper, we’ve been trying to reserve it to no avail. Camping enthusiasts apparently book and pay for the site and then can’t be bothered to camp there. They just want everyone else who is actually camping to feel bad that the primo waterfront spot is both empty and unavailable. I wrote about Site Six here.

And, because we like to complicate our lives even further, we says to ourselves,

I’ve written about all my dogs here, but the latest adoptee.  Well, almost all.  I’ve spared you the sad story of Gatsby the Hospice Dog who was with us but briefly approximately October, 2012 to August, 2013 when she met her maker. Believe me, you are glad.  Poor Gatsby, an adorable Wire Fox Terrier, abandoned in the wilds of Reidland most likely by an owner without the wherewithal (nerve?) to put the dying dog down, hobbled into our lives like everyone else does these days: via Facebook. A picture post by the local Vet who found the dog attracted a certain more sympathetic resident of this household to her cause.

Anyway, the Gatsby story brings into sharp focus the fact that we are a house deeply divided when it comes to doggie adoption.  I, personally, am Team Give Me a Bouncing (preferably) Purebred Puppy and in the other corner is Team All Dogs Must Be Adopted From a Precarious Situation And Their Resulting Foibles Dealt With. I realize mine is probably the more politically incorrect position at this point. And, guess what? I don’t care. I have hand raised two marvelous, exceptional, loving, loyal dogs from puppyhood. They trusted me implicitly in large part, I believe, due to our early association. The bond that results from rearing a dog from babyhood is nothing short of sublime. It has produced some of the best relationships of my life, and I have no regrets about the origins of these former and current family members (I speak here of the departed Isabelle and my precious Westie, Tallulah). I would, in fact, purchase a puppy again. Suck it.

On the other side of the fence is: Hey, want a dog? How about that one-eyed dog over there chained to a dumpster howling crazily at the moon? He’s lonely!

Okay, so maybe I exaggerate a tad.  But you understand my point.

I have written before of our other dog, Vance Shepherd, a Katrina rescue who has spent the majority of his life convinced we will murder him in his sleep. Which isn’t to say I don’t love him. Or that he doesn’t have redeeming qualities. I do love him. But, Lord, there is an easier way if a person has a choice. And if you ask me we do collectively have a choice. (Somebody, please tell me we have a choice?)

Despite my philosophical opinions about adopting dogs and personal misgivings about the health of this dog in particular, Gatsby limped into our lives that Fall an adorable, if failing, addition. It was clear from the beginning that, in a previous life, she’d been To the Manor Born.  She considered car rides her royal due and assumed a queenly, if vaguely disinterested, pose when driven about. She appreciated but also obviously expected her treats. She immediately took to her new soft bed as something she’d never doubted would be provided (“Thank you, you may go now”). She blended with the other two dogs seamlessly forming an easily managed three-dog pack.

All would have been well if not for, as previously mentioned, her extremely advanced age. The vet cautiously confirmed it at “probably twelve” which I considered generous. The dog was fifteen if she was a day. Plagued with cataracts and a terrible case of arthritis in her back and hips which made her entire rear half increasingly unstable, the dog had tooth problems that made us all cringe, and, oh, did I mention that Gatsby grew tumors as a hobby?

All this did not, in the beginning, impinge upon Gatsby’s sunny (if imperial) disposition.

We became a regular stop on our Vet’s home visit rounds. Gatsby was placed on an arthritis med which gave her some relief and increased mobility. We traded some furniture (I’m not kidding) for a series of acupuncture treatments for the dog also aimed at easing her arthritis symptoms (and they did for a time!). We took to dressing her in baby tee-shirts to treat an itchy rash she’d developed. Her tumors were surgically removed. And, in response to this shitstorm of food, shelter, love, cash, furniture, attention, medicine and medical treatments–surprise–Gatsby did improve.

But we all knew it was temporary. Of course it was.

The winter hit Gatsby hard. The benefit curve from her medicine and treatments, fairly sharp in the beginning, began to level out. The cold was an insult that, as the months went by, ground down her tenuous early gains. It was a beautiful Spring morning when we began to have The Discussion.

As we were talking, the dogs assembled for their morning potty and the back door was duly opened for them.

What happened next was that Gatsby, clad in her K-Mart baby tee-shirt that graphically invited everyone to “Get Funky!” staggered out on the deck at the exact moment that a baby robin living in a nest tucked above the door decided to test its newly minted wings. The effect on Gatsby of spying the struggling baby bird as it floated to the ground was galvanizing. Her cloudy eyes cleared in an instant, the formerly feeble dog hurled herself toward the bird, leapt off the deck, and covered the last few steps between her and her prey at a full gallop, pouncing on and killing the bird in one swift, ferocious motion. By the time I got there in response, to screams of “WHAT JUST HAPPENED??” I found a near hysterical girlfriend, a dead bird, and a reinvigorated Gatsby, her mouth smeared with blood looking twice as perky I’d ever seen her. The murder had erased a good five years from her visage and her eyes sparkled and snapped with the renewed energy of a conquering Hun.

The remarkable medicinal benefits (who knew?) of baby bird blood was a wave Gatsby would ride throughout that spring and early summer. But even that boost was not enough to allow her to outrun her significant deficiencies forever. By that August, she was gone.

I could tell you the details, but then I’d cry and you’d cry and we’d all cry and it’s bad enough as it is.

My point is (and I think I have one) is that by the time Ranger would become a possible new addition, I was, shall we say, less than enthusiastic.

(To be continued.  Apparently forever. And in directions I myself do not anticipate.)